Scotlandhour is delighted to announce that Dig It! 2017 is the Takeover Host for our #scotlandhour February 2017 chat celebrating the Year of History, Heritage and Archaeology (#HHA2017) on Wednesday 22 February from 9-10pm.

Dig It! 2017 is year-long celebration of Scottish archaeology with a packed programme of events from organisations across the country. It’s all about discovering Scotland’s past, present and future stories. Whether you’re getting muddy at a dig or strolling through a festival, now is the perfect time to let archaeology move you, surprise you and inspire you. 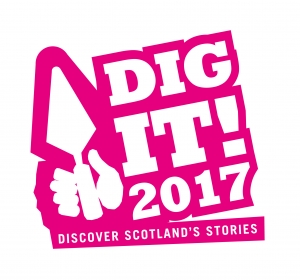 One of the biggest events in the Dig It! 2017 calendar is Scotland in Six. As a Signature Event for the Year of History, Heritage and Archaeology, Dig It! will be running six events on World Heritage Day to highlight Scotland’s six UNESCO World Heritage Sites, including yarnbombing and a Great Roman Bake Off.

It will then shine a spotlight on hidden gems across the country with a voting campaign throughout the summer and a grand finale during Scottish Archaeology Month in September.

Dig It! 2017 is co-ordinated by the Society of Antiquaries of Scotland and Archaeology Scotland. Join the conversation using #DigIt2017 and #ScotlandinSix!

Partnering up with Dig It! 2017 for the #scotlandhour chat will be The Registers of Scotland (@RegistersOfScot).

In 2017, the Registers of Scotland are celebrating a milestone 400 years of land registration! Did you know that back in 1617 – thanks to a Registration Act of the old Scots Parliament – Scotland became home to the world’s first national land register? It’s this beautiful document – the General Register of Sasines – which aptly has its birthday during the year of History, Heritage and Archaeology. As partners for #ScotlandHour, the Registers are looking forward to sharing more information about this seldom-publicised archive.

Make sure to follow @DigIt2017 , and our co-hosts for more on this month’s #scotlandhour chat.

9:10pm Q2. Have you heard of the ‘#Outlander effect’? Which historic sites or stories deserve the Hollywood treatment? #HHA2017 #ScotlandHour

9:40pm Q5. You can discover hidden gems with #ScotlandinSix during #HHA2017! Know any places you won’t find in a guidebook? #ScotlandHour

Look out for more from our takeover hosts, and new chat questions which go live on Wednesday 15 February.

We look forward to #scotlandhour on Wednesday 22 February, 9-10pm – hope you can join us.

Find more information on the Year of History, Heritage and Archaeology via #HHA2017.

Latest from the ScotlandHour Blog